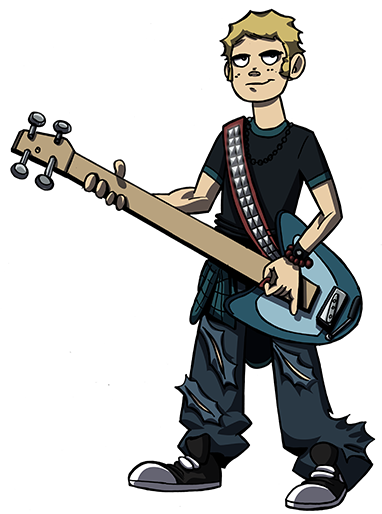 Mike Parks and Jeff Parks are brothers. One Christmas, their favorite aunt and uncle gave Mike a lead guitar and Jeff a bass guitar. Instantly the two boys discovered that their instruments could provide a welcome escape from their alcoholic stepfatherʼs abuse. So, on their own, they became accomplished musicians who play by ear and can duplicate the lead and base guitar parts of any music they hear. Both boys met Raj Kumar at the CC where their Karate classes take place.

Mike, the overly driven, self-disciplined oldest boy in the family, has his black belt and teaches Karate at the CC. Jeff, the more laid-back second boy in the birth order, has his brown belt. The fact that his older brother has a higher Karate ranking neither concerns, nor inspires, Jeff. Indeed, opposite of his over-achieving brother, Jeff is quite content with mediocrity.